On Purpose London October 2018 Fellow, currently exploring how to bring his skills to the creative industry. 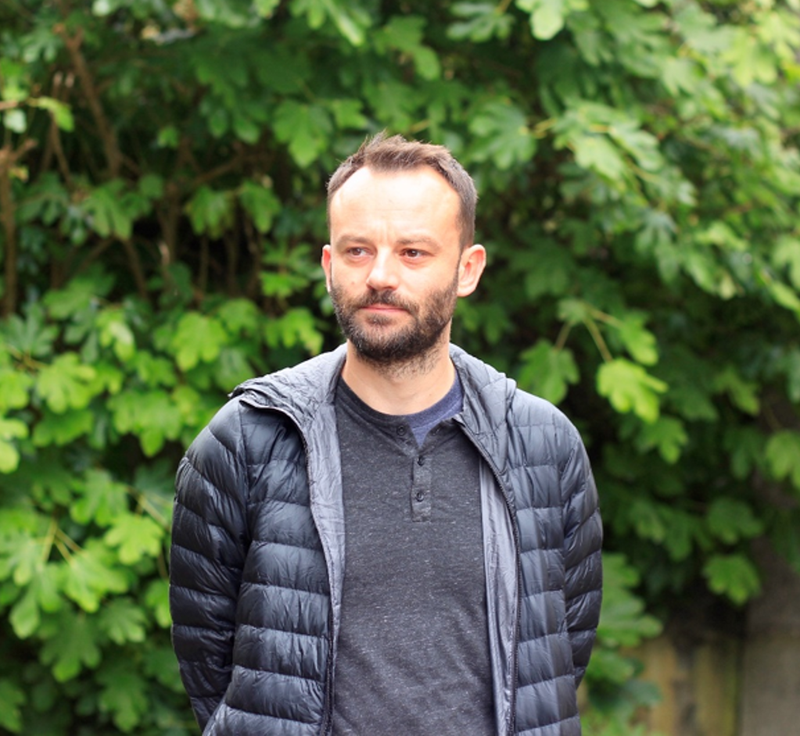 Can you tell me about your background and your career prior to On Purpose?

Before On Purpose I spent 18 years working in the financial services industry in the US, UK, and Germany. While I did a lot of different jobs in that time I tended to focus on strategy, product development, and new market development projects.

I sort of stumbled into banking unintentionally when I was studying sociology in the US as I needed a job that paid better than waiting tables to be able to stay in New York City. It turned out I had a knack for solving the types of problems that they needed to have solved so I stuck with it for a long time. I never imagined I’d be a banker “when I grew up” and spent much of the 18 years pretending it was just temporary until I figured out what I really wanted to do.

What are you doing now?

Having just relocated by entire family (husband, son, our dog and cat) to Germany from London I’m still trying to find my feet. Luckily my husband was able to take his job with him which has allowed me a bit of extra breathing room to figure out where I want to focus next. I know I want to work for a much smaller organisation and hopefully in the creative industry or the arts if I can find the right fit.

Moving here was actually the result of one of the Friday training sessions when we were asked to imagine our lives in the future. I had been vaguely thinking about Munich, where I grew up, for a while but always assumed it would be too complicated to make the move. The session prompted me to actually work through how a move might work — and as it turned out it’s actually not that hard if you put your mind to it.

How did you feel in your work before you decided to make a change?

The last year in banking was tough for me as I was starting to burn out quite badly. I didn’t really recognise the symptoms until I had left and could get some perspective on things, though. In the moment I just knew I dreaded going to work and was unhappy — my husband told me later I was also quite difficult to be around as I was irritable and crabby most of the time. In retrospect I know this was the burn out and the feeling of being trapped coming together and making things feel helpless.

I also knew, looking at my bosses, that I definitely didn’t want their jobs — and all the trade-offs of work/life balance that entailed. I was usually always striving for the next thing, the next level, etc so not wanting to move forward was a red flag.

At what moment did you decide to make the change?

It all started with me calling the corporate mental health line to see if I could get some help dealing with stress because I knew something had to change. They sent me to a therapist who listened to me pour my heart out before looking at me and asking “have you considered not working there?”

I had never even considered the possibility and the question floored me but also turned my thinking upside down. Put in simple terms like that the answer was obvious — don’t work there anymore. I decided on the spot that I would leave banking within the year and never felt more relieved. The practicalities of leaving took a bit longer but once I had decided to go everything was clear.

Why did you join the On Purpose Associate Programme?

While I had decided to leave it took longer to figure out what to do instead. I spent a lot of time talking to people that had changed careers drastically, read everything I could find and even worked with a coach to figure out my next steps.

I had just two criteria for what was next — “optimise for happy” and “be a net-add to the world” and On Purpose fit both of them to a T. I wanted to do work that was as far away from banking as I could find but still let me add something of value.

What was the most difficult thing about making this change?

I’m not sure anything was difficult as such since leaving my previous career was such a relief and I was happy to make all the trade-offs required to make it work. I know money is a concern many people bring up when they think of joining but it was much less difficult than anticipated.

One of the things I’ve noticed is that surrounding yourself with people who are in a similar situation as you are helps tremendously in checking any “keeping up with the Jones’s” feelings around money and status.

Can you tell me more about your placements?

I got matched with two youth-focused organisations, National Citizen Service (NCS) and A New Direction, that let me see that sector from two very different perspectives. NCS is a national organisation with a big budget working with almost 100,000 young people each year, while A New Direction focuses just on London with a focus on connecting the arts and creative world with kids and schools.

I ended up working on a really different projects too — for NCS I worked with their Inclusion team on how the programme helped young people with special educational needs access the programme. At AND I ended up in charge of finding them a new office, kitting it out with furniture and technology and moving the entire team to their new home.

What’s the most important thing you learnt during your year as an Associate?

A big insight over the year was how much more important the culture of an organisation is to me than almost any other aspect of the role. I started the year thinking I needed to find a job where the role was the right fit while now I know most jobs can be fun if I’m happy with the culture and the people I’m working with. Maybe this is obvious to others but it’s changed my approach to finding work now.

What support did you get along the way?

While there’s a lot of structured support from On Purpose (mentors, coaches) the most valuable part for me was the cohort I was with. We meshed together really well and continue to be a support network for each other after the programme finished.

Ask about Big 5’s if you sign up for the programme — it’s been a godsend.

How did your year with On Purpose set you up for your new career?

It gave me a ton of exposure to different kinds of projects and an instant network in the industry. One of the major benefits is that I am now part of an extensive Fellows network all across the sector — and all of them (or at least all I have met) are happy to give advice, introductions, and explainers about their companies and organisations. Networks are powerful and the On Purpose one is the best one if you want to get into the purpose-led sector.

What advice would you give to others in a similar situation?

Talk to people around you and get an outsider’s perspective on your situation. People around me saw much earlier how unhappy I was with my work than I did but I needed to be open to hear it.

Also if you’re generally risk averse and seek security (savings, backup plans, etc.) then consider if this situation isn’t exactly the one you’ve been preparing for all this time. A friend said this to me when I was worrying about savings and money and it reset my thinking — this was the moment for me to invoke plan b.

Finally — if your mental health is not great reach out and access help. There are tons of resources but you need to actually use them. Screw any taboos about mental health and get the help you need.

What do you miss about your old career, and what don’t you miss?

I really miss managing people and teams which I enjoyed immensely. It was always so gratifying to see people develop and move on to the next bigger project (that should be every manager’s goal in my opinion.)

I don’t miss the posturing and the obsession with “more” that I saw around me a lot.

What gets you out of bed in the morning?

Right now the kid and our greyhound Boris :), both of whom either need to head off to school or want to go outside to pee.

I know I should list some higher purpose here but honestly, the life I envisioned in that Friday session looked exactly like that so I’m happy with it.

Apply to join the Associate Programme