What are elected leaders doing to stay on track with the Paris Agreement?

No-one is acting fast enough to tackle the urgency of the climate crisis.

The Paris Agreement gives state actors a universal mandate to reach this target: keeping temperature rising within 1.5 degrees compared to pre-industrial levels. It was signed by 189 countries. And yet, we are still far from the recommended trajectory. So how do we get on track? Where are emissions coming from? If nation states are not meeting their commitment, which leaders could set us on the path towards carbon neutrality?

Cities are the biggest source of greenhouse gases, responsible for 70% of global emissions. 55% of people worldwide live in cities and numbers predict that 70% of the population will be in cities by 2050. Heads of state are trying to pull their weight, but we should also really look at what city leaders are doing.

And this is where there is a glimmer of hope: no-one is acting fast enough to tackle the urgency of the climate crisis. But no-one is doing more than cities.

Did you know that within the past two years, Los Angeles Mayor Eric Garcetti published a directive to have 100% of vehicles in the city be zero emissions by 2050; London's air quality policy led to a 97% reduction of exceedance in nitrogen dioxide, Shenzhen built the world's first fully electric bus fleet, nearly halving their Co2 emissions; and Freetown has been planting a million trees to reduce floods, water shortage and deforestation through its Freetown Treetown campaign?

Mayoral constituencies are much smaller and their power therefore less extensive. But this is also what allows mayors to be much closer to their residents, and much more nimble. And think about this at scale: the populations of the three megacities (those cities with a population of more than 3 million people) of Los Angeles, Bogotá or Lagos, equal that of Chile. So when their mayors make a decision, they do carry weight on the global stage, particularly when these choices are made together. 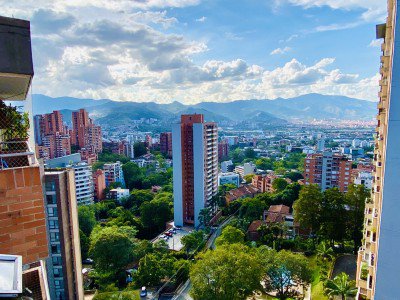 In 2005, long before the Paris Agreement, a small group of megacities, aware of the potential of such a coalition, created a working group with the ambition to tackle the climate crisis. It was led by a handful of city staff and administered by the then Mayor of London's office. Fast forward 15 years and this project is now an independent charity with 230+ staff based on all continents. It is called C40 Cities - though this is a deceptive name, as it is now a network convening 97 of the largest and most influential mayors across the globe. Together, they represent one in twelve city residents across the globe and 25% of its economy. Together, they are also the most ambitious networks of elected leaders taking concrete and effective action against climate change.

Membership to C40 is not based on a financial contribution but on a mayor's ability to demonstrate climate leadership and to go beyond pledges and commitment through action. When they become a member of C40, mayors commit their cities to reducing their fair share of emissions, so that collectively all cities in the network halve their emissions by 2030, and reach carbon neutrality by 2050. "Their fair share" is determined by their current emissions and the resources they have available for climate action. What it means, for instance, is that some of the wealthiest cities like Copenhagen in Denmark could commit to carbon neutrality by 2025 but cities in developing economies, like Accra in Ghana, might only manage to halve their emissions in 2040.

So what are these megacity mayors doing to reduce emissions?

In 2017, the Focused Acceleration report, showed that the majority of city emissions were concentrated in the Energy, Building, Transports and Waste sectors. This is broadly true in every city, but the volume of emissions and the systems creating them vary across each sector and municipality. The journey towards carbon neutrality therefore starts with a mapping exercise - as the saying goes, "you can only manage what you can measure". So cities build inventories showing where their most carbon intensive sectors are, and this way they can create a plan of action to reduce the emissions under their jurisdiction. This is a lengthy process, since collecting data is expensive at best and extremely challenging at worst: many cities lack dedicated resources, or indeed the data itself, even more so when data should be disaggregated in order to understand which groups within a city are most impacted. Climate action can only be inclusive - and will only be successful - if policies are also designed to promote equity.

Once mayors know where the biggest sources of emissions are produced, they can design an inclusive climate action plan to tackle them: for this, they need access to solutions, proofs of concept and an understanding of what implementing such systems or policies would entail. Some are bold enough to try something new, like Mayor of London Sadiq Khan who created the largest ultra low emission zone in the world, but you can't only implement innovative policies, and building on what other cities have done and are doing allows mayors to leverage knowledge and existing markets.

As soon as an inclusive climate action plan is published, the actions need to be implemented. But it is rarely easy, as there are many barriers to action. Finance is often the primary one, and it is particularly true for cities in developing economies, who often face the biggest lack of resources and budget. This has been exacerbated by COVID-19 and now, city budgets across the world are being slashed to address the changes and constraints the pandemic has brought upon our urban way of life. Another barrier are lobbies and public support. Take the example of Mayor Hidalgo in Paris, who decided in 2016 to make the banks of the Seine more pedestrian friendly by closing it to cars. This was a bold attempt to improve air quality and reinforce the mobility revolution at play across the city. However, she was faced with violent criticism and lawsuits from conservative politicians and the motorcar industry lobbies: she had to stand her ground and make her case in court, which she did successfully. Few of these services can be addressed by cities alone: they need businesses and other actors to develop and provide solutions that are tailored to match the need to be fulfilled.

Initiatives and programmes have been developed to help mayors break down these barriers: The "C40 City Finance Facility" gives access to finance for climate change mitigation and resilience projects in urban areas, by providing technical assistance to develop cities' sustainability priorities into bankable investment proposals. Research teams work on documenting the benefits of putting climate action at the heart of urban policy making and make the case for the social and financial benefits it can bring. Most recently, a task force led by 11 C40 mayors published The Case for a Green and Just Recovery, showing that "to date, only 3–5% of an estimated US$12 - $15 trillion in international COVID stimulus funding is committed to green initiatives''. But a stimulus funding designed to support a green and just recovery would offer a means to keep global heating below 1.5 degrees, and could reduce air pollution by as much as 29% between 2020–2030, whilst also creating over 50 million sustainable jobs by 2025. Business engagement programmes allow cities and businesses to support each other: recently, for instance, the Women4Climate Tech Challenge awarded support to three teams of female entrepreneurs to accelerate their solutions in Stockholm, Tel-Aviv Yafo, Lisbon and Los Angeles. On a bigger scale, the City Climate Business Alliance enables and reinforces the development of public-private partnerships in cities, based on climate action.

This is where the real strength of C40 lies. All programmes are designed to foster knowledge exchange between the member cities of the network. Mayors and their teams can connect with one another about sector-specific actions in areas like transport, food systems or clean energy, or about cross-sectoral activities in urban planning, resilience, water management or business engagement. And teams from city halls around the globe can share their priorities, challenges and solutions. For instance, Ho Chi Minh City and Quito both took part in a Waste Management workshop in 2018. Following this, they kept in touch to discuss Quito's solid waste transfer stations. Less than two years later, Ho Chi Minh City is inaugurating their very own station, directly informed by the knowledge the Ecuadorian teams have been sharing with their Vietnamese counterparts. And this is only a single example of the dozens of connections that are established across the network each and every week.

Another benefit of international collaboration that cannot be underestimated, especially in 2020, is peer support: in March 2020, when the global pandemic began accelerating around the world, C40 mayors used the network as a platform to reach out to one another. With only a few days notice, no less than 45 mayors jumped on a call, with the mayors of Seoul and Wuhan sharing their experiences, so that their counterparts could be equipped to anticipate the necessary response to the virus when it would reach their shores. This is also valid outside of times of pandemics: a number of mayors across the world work against climate-sceptic national administrations and need to stick together, such as mayors in Brazil or Australia; other mayors already see their territory widely impacted by climate change, and therefore need to focus their efforts on adaptation measures to withstand floods, droughts or mudslides, at the same time as they reduce their emissions. Connecting cities means that, for example, a solution tested and proven in Sierra Leone can be exchanged with cities in Colombia.

C40 is built on the principle that there is more that unites the great cities of the world than divides them, and so far that is proving correct: more than 30 C40 cities have already "peaked", meaning their emissions are now steadily declining (by an average of 22%). Whilst these numbers are encouraging, we are still off track globally, and the window of action is closing. What C40's work can teach us is that when it comes to climate action, no one can drive change on their own, and it is up to us - businesses, civil society organisations, and communities - to make sure our needs are heard: creating coalitions to spread momentum to all components of society.

Look out for your next town hall assembly, or public transport consultation, or even the next public tender - our climate mayors need us just as much as we need them.

Pauline Eloi is the Advisor to the President of the Board at C40 Cities. She has been working for the organisation for over two years, prior to which she was an On Purpose Associate. Views above reflect her experience as an individual and are not written on behalf of C40 Cities.

For more information on C40, visit their website or the C40 Knowledge Hub, to access open source material on urban climate action.